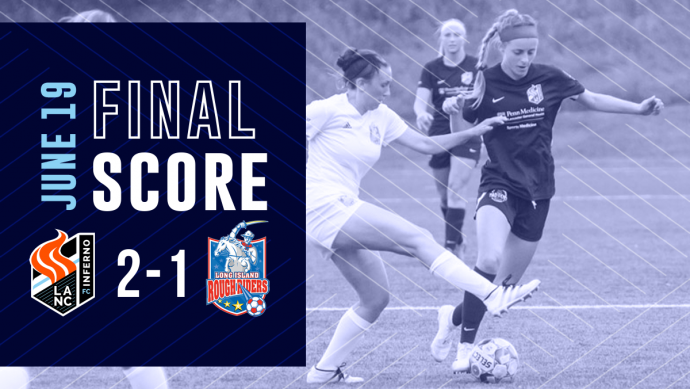 The long trip to Long Island for a midweek game did not slow down the Lancaster Inferno as they came back home with a 2-1 win over the Rough Riders. The Inferno (4-1-0) notched its 4th consecutive win and second over the LI Rough Riders (4-4-0) in a span of 4 days.

The game played at Hofstra University soccer stadium was played on wet turf from the downpour, which impacted the efforts of both teams trying to control the ball.

Inferno had a couple of opportunities in the first half with the best coming off a breakaway by left fullback and co-captain Ashley Chilcoat (LaSalle). Chilcoat made an impressive 60 yard run but shot the ball wide after beating 2 defenders. Inferno persisted in the attack and controlled most of the play in the first half.

The Rough Riders got a break in the 34th minute when the referee called a penalty kick against Inferno. The PK, taken by Long Island’s Kayla Saeger, slid underneath Inferno keeper Kelly O’Brien (Lafayette). The score was 1-0 at the half in favor of Long Island.

Lancaster came out in the second half determined to take the 3 points back home. Inferno barely missed a tying score in the 63rd minute on a cross from Kay Liebl (Millersville) to Kendra Jones (American/Villanova), who one-timed, but the shot went just wide.

One minute later, Teresa Rook (JMU) recovered the ball on the right wing and crossed into the box. The ball was mishandled by the Long Island keeper, who was pressured by Kay Liebl. Liebl alertly recovered and passed it to Megan Carroll (Bloomsburg) inside the 18th. Carroll took advantage of the Long Island keeper out of the goal, and tied up the game with a solid shot.

It was great heads up play by Kay who followed up and then beat the goalkeeper as she tried to recover the ball. Kay found Megan who had trailed the play and was just inside the 18th. This goal was a reward to both players’ persistence and hard play throughout the game.

In the 80th minute of a misplayed ball by Long Island’s defense, Jackie Richards (Exeter HS/Xavier 2019 commit), made a run down the left side and crossed the ball to Teresa Rook inside the box, who one-timed it to the right of the goalkeeper.

Long Island didn’t give up easily and pressed up high with several shots that went wide of the goal. Lancaster made several substitutions to shore up the defensive play and kept the Rough Riders at bay for the last 10 minutes. With this win, the Lancaster Inferno stays in the hunt for a playoff spot, tying Long Island for 4th place with 12 points.

This win says something about the resilience of this team and also their commitment as we traveled with a full roster for a midweek game.

Lancaster Inferno plays their next game at home (Millersville University – Pucillo Field) this Saturday, July 22nd at 5 PM vs the New Jersey Copa FC. A victory in this game could move Inferno up to 3rd place in the East Conference.