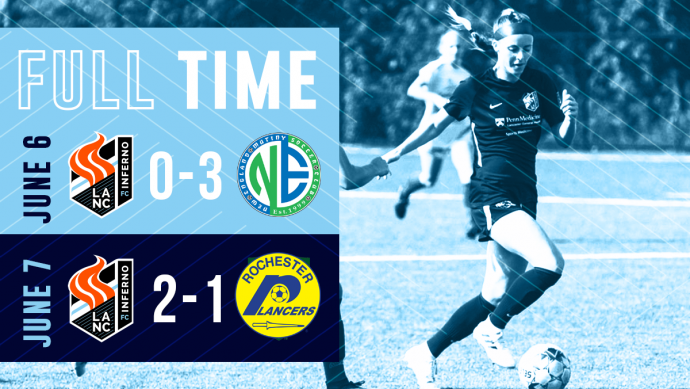 Inferno Finishes Regular Season with Back to Back Home Games

Inferno went into the match on Saturday against conference leader’s New England Mutiny, knowing it was going to be one of the toughest of the season. The outcome of the match would determine who would come out on top of the conference; if Inferno won the last two matches of the season, they would finish in 1st place.

The weather looked ominous during most the match threatening both teams, but the real threat to Inferno proved to be New England Mutiny’s Kate Howarth, who ended up with a hat trick.

Howarth, currently the leading scorer in UWS, helped Mutiny get an early lead in the 33rd minute. Her other two goals were just ten minutes apart in the second half (51′ and 61′).

She’s not going to miss. If she gets one chance, she’ll score. That’s tough to play against.

Despite some good chances, especially early in the match, Inferno wasn’t able to get the ball in the net. The game ended with a 0-3 loss, putting Inferno firmly in 3rd place in the East Conference.

Almost immediately after the final whistle was blown, the skies became dark, the wind started blowing, and the rain began to fall, reflecting the general mood in the stadium at Pucillo Field.

But, there was a popsicle social scheduled and some young fans that were determined to meet their favorite Inferno players, so the social was moved indoors.

The young fans didn’t seem to be affected by the heavy loss. Their excitement was contagious and soon the Inferno players were laughing and enjoying renewed optimism about the next day’s match.

Coming back the next day after the worst defeat of the 2019 season was challenging for Inferno. Bodies were sore from the game the previous day, energies were low, and the outcome of the game was not going to change the East Conference Standings.

But, true to form, the Inferno players proved that they don’t give up easily.

I told them this has to be the first game of our playoffs. Let’s win it. Let’s have that attitude.

Kay Liebl (Millersville) scored early in the game (23′), off a pass from Haley Crawford (JMU), with the teamwork earning “UWS Goal of the Week”.

Crawford also added a goal for Inferno when she received a pass from Megan Carroll (Bloomsburg), outrunning the defense to put the ball in the goal at the 42nd minute.

Despite controlling the ball through most of the game, Rochester was able to get a point on the board at the 74th minute, when a cross bounced off an Inferno defender and into the net for an own-goal. The game ended with a 2-1 win for Lancaster.

Finishing the season in 3rd place forces Lancaster Inferno to travel for East Conference playoffs. The first match is at 7:00pm on July 12th vs Connecticut Fusion. Match Details >