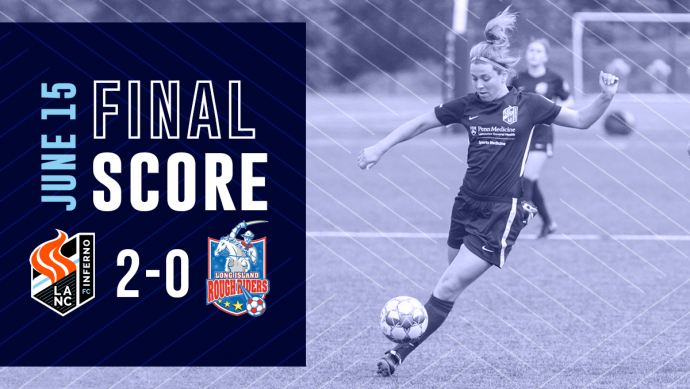 Lancaster Inferno shut out the high scoring Long Island Rough Riders offense this past Saturday at Millersville University – Pucillo Field. After a two week layoff, Inferno took some time to adjust to the game speed and was able to secure the win.

Going into the match, the Rough Riders were in second place in the East Conference, with 12 points (4-2-0). Lancaster Inferno, with fewer games played, was in fifth place with 6 points (2-1-0).

Long Island traded direct kicks and both teams created scoring opportunities early, but it was Lancaster Inferno who struck first, with a goal by Haley Crawford in the 24th minute. The play originated on a defensive takeaway by Ryelle Shuey who passed it to Kendra Jones on the right wing. Kendra made a short pass to Teresa Rook (Rynier) in the middle who was able to connect a through pass to the speedy Haley Crawford. Crawford beat two defenders and dribbled around the goalkeeper to score with her right foot.

Long Island’s best scoring opportunity of the game came in the 32nd minute from a direct kick outside of the 18 by Taylor Groth. The hard shot to the upper right corner was saved by Inferno goalkeeper Kelly O’Brien.

We have worked to limit our opponents’ opportunities and did well only allowing 3 corner kicks and 5 shots. Our GK Kelly O’Brien along with the defense frustrated the LI attack and came up with a big save off a direct kick in the first half.

The second half saw both teams trading possession and chances. In the 69th minute, the Rough Riders initiated a counter-attack which resulted in a shot from outside the box and another great save by Kelly O’Brien. Long Island committed more players forward looking for the equalizer. The Inferno defense withstood the attack and with 8 Long Island players in the box for a corner kick, Inferno began their own offensive maneuver. It began with a clear from defender Marissa DiGenova, which found Bri Kropinack open at midfield. Bri headed the ball to Teresa Rook who fought off the 2 central Long Island defenders to score from the 24 yard line with the goalkeeper off her line in the 89th minute. Lancaster was able to run out the clock and secure its third win of the season.

The team has worked hard over the past few weeks to maintain possession and defend well on our defensive third. We look forward to continuing to improve in all aspects of our game as we enter a tough stretch of away matches.

Following this past weekend’s games, there has been some movement on the board with New England Mutiny (5-0-1) passing Connecticut Fusion (4-0-2) to move into first place in the East Conference. Dropping down to third, the Rough Riders now have a record of 4-3-0, with Inferno at fourth place with a (3-1-0) record.