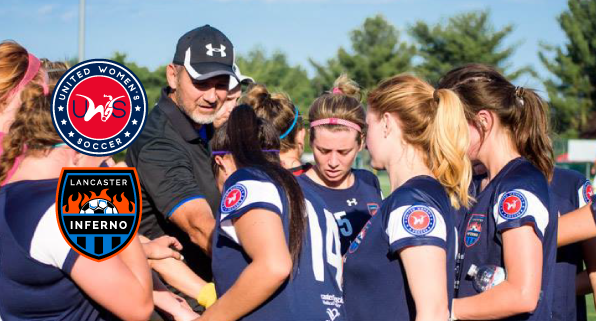 Back for his fourth season is Francisco Cleaves, Head Coach/Owner of the Lancaster Inferno. “I am very excited to have this coaching staff and have confidence that all the players will learn a lot this season.” Francisco holds a USSF National “C” License, and has over 20 years experience coaching at the youth, high school, collegiate, and amateur level.

Joining as Associate Head Coach is former Inferno player, Stephanie Cleaves. A graduate of Lancaster Catholic High School, Stephanie has played premier level soccer or above since 1997 and began coaching during her final seasons as a collegiate player. Stephanie represented Honduras as a member of its Women’s National Team from 2010-13. She played three seasons for Lancaster Inferno and was named an All-Star for the South-Atlantic region (WPSL) in 2014. Stephanie was an Assistant Coach at Franklin & Marshall College (1 season), Elizabethtown College (4 seasons), and Elizabethtown Area H.S. (1 season). She holds her USSF National “C” License and is a head coach at Penn Legacy FC.

“I am excited to transition from Inferno captain & player to Associate Head Coach. I look forward to working alongside our coaching staff to provide a professionally run program to help our players reach their goals.”

Also new to the coaching staff this season is Goalkeeper Coach, Cameron Fertenbaugh. Cameron holds a USSF “D” license, a NSCAA National License, a NSCAA GK Level 3 diploma, and will take the NSCAA Advanced National GK Diploma course at the end of the summer. He is a Goalkeeping Director at Keystone FC, Head Coach of a U14 boys team at Keystone FC, Goalkeeping Coach for York College Women’s team, and a Region 1 ODP Goal Keeper Staff coach. In addition, Cameron runs his own Goalkeeping Academies and works for No. 1 Soccer Camps.

“I’m very excited to join the coaching staff. I know there are some very talented goalkeepers I will be working with, I’m looking forward to developing their game and taking them to the next level. As always with joining a new team, I hope to learn from the coaching staff as well as bring my knowledge and style to the team. I’m really just ready to get to work and to see how far we can take this team.”

Chris Weibel enters his fourth season as Inferno’s Strength & Conditioning Coach. Chris holds his bachelor’s in Physical Fitness from Houghton College. He has been the Head Varsity Basketball Coach at Veritas Academy since 2011, where he has recorded the most wins in the school’s history. Chris has over 8 years of experience leading speed & agility training for athletes at the youth, high school, collegiate, post-collegiate, and national team level.

Adam Lewis enters his second season as a Goalkeeper Coach. He has over 10 years of experience coaching across the United Kingdom, Sweden and USA. Adam also played four years professionally (Birmingham City, England & AIK Boras, Sweden) and seven years at the semi-pro level. He is currently the Head Goalkeeper Coach for several local youth programs. Adam holds a UEFA “B” Coaching License and England Football Association (FA) Level 2 Goalkeeping certification. He is a Soccer Plus Director & Staff Coach, run by coach Tony DiCicco, and is the Goalkeeper Coach for Goucher College (Baltimore).

“I am excited about returning to the Inferno for my second year, and working with the keepers to reach their full potential.”