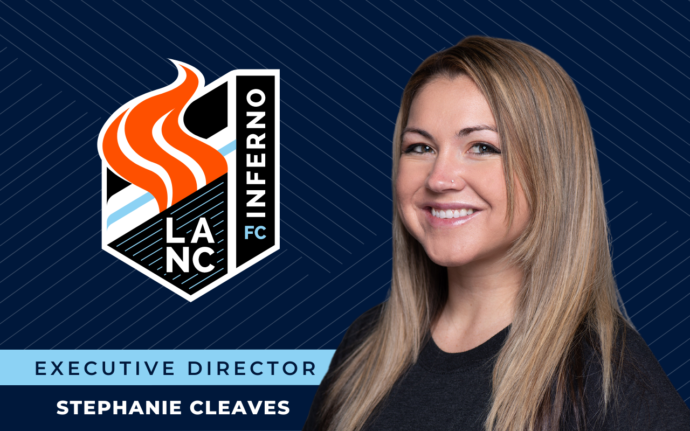 Lancaster, PA – Lancaster Inferno FC is pleased to announce that Stephanie Cleaves has been named Executive Director of the club. She will also be coaching teams in the newly announced year-round all-girls youth soccer program set to launch in August of 2022. Stephanie most recently served as Marketing Director and Associate Head Coach of Lancaster Inferno’s United Women’s Soccer (UWS) team from 2017-2019.

A graduate of Lancaster Catholic High School and Houghton College (NY), Stephanie has played premier level soccer since 1997 and began coaching during her final seasons as a collegiate player. Stephanie represented Honduras as a member of its Women’s National Team from 2010-13. She played three seasons for Lancaster Inferno and was named an All-Star for the South-Atlantic region in 2014. Stephanie served as Assistant Coach at Franklin & Marshall College, Elizabethtown College and Elizabethtown Area H.S. She holds her USSF National “C” License and has been coaching club soccer since 2014 and for the EPYSA Olympic Development Program (ODP) since 2019.

“I am very excited to help lead our new initiative and look forward to working with all of the staff and coaches,” said Cleaves. “We plan to leverage our current operations staff of the UWS pro-am teams to support the youth program. Our Strength and Conditioning Coach, Chris Weibel, will also be overseeing the Sports Performance side of the youth club as well.”

Chris Weibel has been serving as the Strength and Conditioning coach of Lancaster Inferno’s women’s teams since 2014. He has a bachelor’s degree in Physical Fitness from Houghton College, and over 10 years of experience training elite high school, college, and professional athletes. Chris will be providing feedback to teams and players allowing them to improve in the areas needed in order to reach peak performance. With a focus on injury prevention specific to girls and women, Chris will work alongside the coaches in an effort to keep our players healthy and confident in their athletic abilities.

“I’m thrilled to be able to continue to work with the Inferno on a larger scale,” said Chris Weibel. “It’s incredibly important for athletes to be able to have the training and knowledge to better their playing career and stay free from injury. With our program, they will get individual analysis and attention in order to achieve the level of play that they desire, while also reducing their risk of injury.”