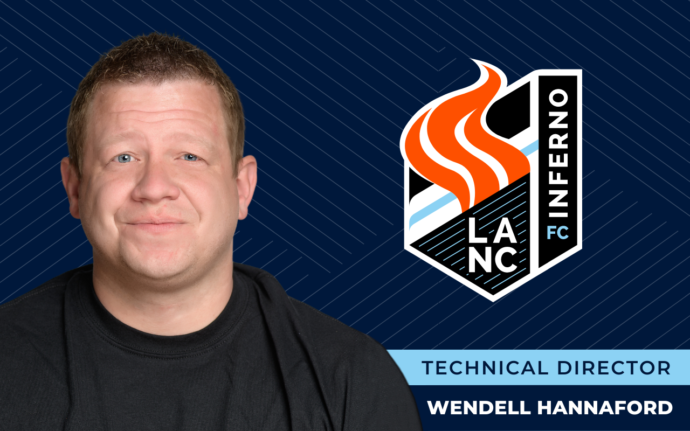 Lancaster, PA – Lancaster Inferno is excited to announce Wendell Hannaford as the Technical Director of the new youth club. Wendell initially joined the Lancaster Inferno staff in 2021 as Head Coach of the UWS League Two U23 team. He helped lead the U23 team to earn the Mid-Atlantic North Conference Championship title and was named the Mid-Atlantic North Coach of the Year.

“I am looking forward to having Wendell as part of our youth club staff,” said President Francisco Cleaves. “I am confident that he will be an invaluable asset to both players and youth coaches in our club.”

Hannaford has been the Head Coach of Warwick High School’s Girls Varsity soccer team since 2016 and was named the 2020 LL League Section 1 Coach of the Year. He has led the Warriors to 3 district playoff appearances, a runner-up Section 1 placement, and a 2021 Team sportsmanship award. His players have received 23 All Star recognitions, 4 LL League Big 11 all stars, 1 LL section 1 MVP, and 1 PIAA All State recipient.

With over 10 years experience coaching club soccer, Wendell has coached the U16-19 age groups at Penn Legacy FC and PA Classics and has led his teams to multiple tournament and league championships, as well as an EPYSA Cup final. Previously, he was an assistant coach with both the Men’s and Women’s soccer teams at Albright College from 2009-2011.

Hannaford also coached for 5 years with the Olympic Development Program (ODP) for the U12-13 age groups. He has also served as the Director of Girls Soccer for Lititz Youth Soccer Club (LYSC) since 2016 and as the Lititz Summer Showcase Tournament Director from 2016-2021. Wendell has his USSF “C” License, in addition to numerous United Soccer Coaches Diplomas.

Wendell’s accomplishments as a player include a standout college career as goalkeeper at Albright College, where he still holds the career record for “Most Shutouts”.  During his time at Albright, Hannaford was also named Commonwealth Conference Goalkeeper of the Week on two occasions, and was named Second Team All-Conference in 2007.

“It is a privilege to have the opportunity to serve Lancaster Inferno and its future players as the Technical Director and Coach,” said Wendell Hannaford. “Soccer has taught me so much in my life and has helped me navigate all of the ups and downs that ‘real life’ has thrown my way. Being able to utilize this beautiful game to help players overcome and achieve is a blessing. There is no greater feeling than helping prepare today’s youth for future success on and off the field.”

Stay tuned for more announcements and updates on Lancaster Inferno FC. The 2022/23 Travel Team Tryouts are now posted – prospective players must register at the following link. For more information, visit lancasterinferno.com and connect with @LANCinferno on Facebook, Instagram, YouTube, and Twitter.