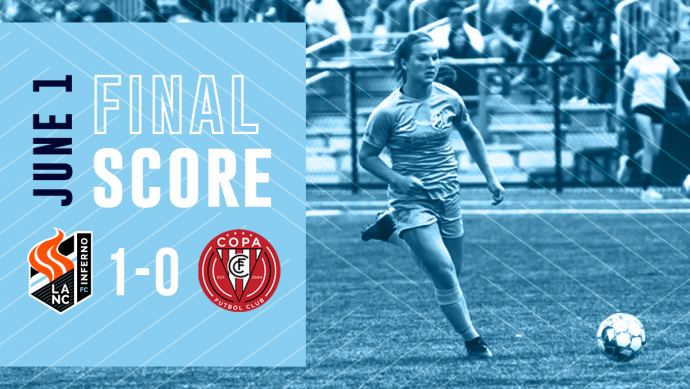 Lancaster, PA – For the second straight game, the Lancaster Inferno outshot it’s opponent (15-8), but was only able to capitalize once to down NJ Copa FC on Saturday in New Jersey. Last season’s UWS Offensive Player of the Year, Haley Crawford (JMU), scored in the 39th minute off a cross from veteran midfielder Teresa Rook (JMU, Ottawa Fury).

Copa’s adjustments in the second half created more chances, but 2018 UWS Defensive Player of the Year, Kelly O’Brien, was able to keep the shutout in net (5 saves). Inferno also had opportunities in the second half but was unable to finish. Lanc Inferno improves to 2-1 while NJ Copa falls to 1-3.

It was a good win for us on the road. We defended well as a team which frustrated our opponent. Our midfield worked well together and created many opportunities for our forwards. The goals will come, and we’re really happy with the progress the team has made so far. – Head Coach Francisco Cleaves

RESERVE SQUAD
Inferno’s Reserve Squad will take on the Philadelphia Fever this Friday, June 7th at 7:30pm (Trifecta Sporting Club) for their second friendly of the season. The talented Reserves previously tied the Philadelphia Lone Stars 0-0.