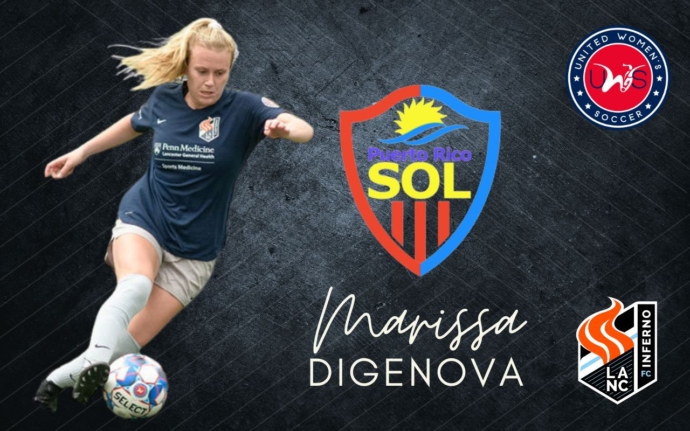 Lancaster, PA — Lancaster Inferno is excited to announce that co-captain Marissa DiGenova has signed with Puerto Rico Sol. Marissa has been a part of Inferno’s First Team since 2018, and a standout in the United Women’s Soccer (UWS) national pro-am league. She helped lead Lancaster Inferno to back-to-back National Championship appearances (2018-2019) and three East Conference Playoffs. A force to be reckoned with in the back line, Marissa also led the league in assists this past season. Marissa is a 3x recipient of the UWS Iron Woman of the Year award for playing every minute of every game. She has earned East Conference First and Second Team honors the past two seasons.

“Marissa’s goal has always been to continue her playing career post-college,” said Inferno Club President/GM Francisco Cleaves. “I’ve watched her mature and continue to improve different aspects of her game over the last 5 years. She will always be part of our Inferno family.”

Marissa is a 2022 graduate of Temple University where she played Div 1 soccer and was team captain her last two seasons. She played in 51 total games with the Owls and only missed one game in the last four seasons. As a youth player, Marissa played club soccer for FC Delco and was team captain for 7 years. Also, a high school standout for Villa Maria Academy, Marissa scored 55 goals and had 25 assists.

“I am super excited to be signing with Puerto Rico Sol! I want to thank my family and friends for all of their love and support,” said Marissa DiGenova. I would like to thank my Lancaster Inferno family for their continued support throughout the years and inspiring me to pursue my dreams. I would also like to thank the UWS for providing high level soccer to help me improve my game and reach the next level. And finally, thank you to all of my teammates who have continued to push me. I wouldn’t be able to do this without any of you, I am super excited to get started!”