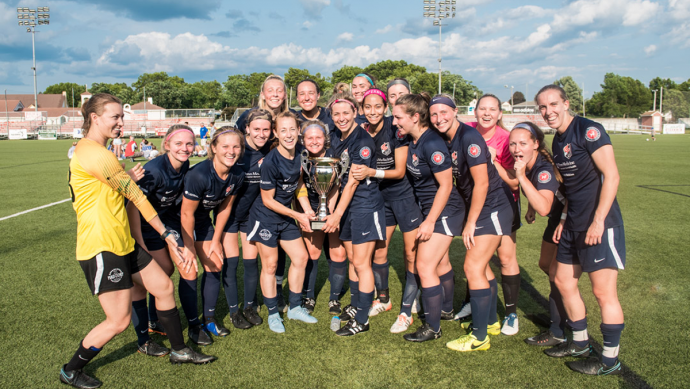 Inferno caught Mutiny off-guard with a goal by Kay Liebl (Millersville) in the 2nd minute of the match.

Teresa (Rynier) Rook (JMU) started the play with a corner, caught by Sonia Rada (U of Maryland), who gave it a quick pass to Liebl. The early score allowed Inferno to control the pace of the play through most of the first half.

New England had it’s share of scoring opportunities, especially in the second half. A total of 11 shots on goal by Mutiny kept goalkeeper Kelly O’Brien (Lafayette) busy, with 10 saves for the match.

We made the most of our scoring opportunities, and the defense came up big, forcing New England to shoot from distance.

The Mutiny equalized the score in the 72nd minute on a great individual effort by Kate Howarth from right outside the 18th.

But, Inferno was not done and took advantage of a counter-attack in the 81st started by Rook dropping a ball to Jackie Richards (Xavier) in the right wing. Jackie took off, beating the defenders and the goalkeeper, putting the ball in the net with a right footed shot

The Mutiny committed more players to offense but was not able to convert as Inferno was able to kill the clock.

It was definitely a gutsy win after playing Friday night against a very strong team like Connecticut Fusion. The pressure was all on the home teams since they finished in 1st and 2nd place respectively.

The win earned Inferno the East Conference, giving the team the opportunity to compete in the UWS National Championship for the second year in a row. This year the championship is hosted by the Calgary Foothills, the 2019 UWS West Conference champions.

It is the second consecutive year for Calgary to earn that title as well, and the two teams play each other for the semi-final. (Read about the semi-final).

Your support of Lancaster Inferno is appreciated!